Estimating Solutions Group Owner and Director, Dale Foster, will be participating in this year’s St Vinnies CEO Sleepout. He and nearly 100 other people will be sleeping out in the cold at the WACA on June 27.

In Australia, there are over 105,000 Aussies that sleep out in the streets each night, including 17,845 children. There are a number of reasons why people become homeless; including financial hardship, health issues, house crisis, and lack of family support. Sadly, 24% of homeless people are victims of domestic violence.

The CEO Sleepout aims to raise awareness and funds for homeless Aussies, with the goal of ending homelessness. People from all around Australia commit to sleeping out on one of the coldest nights of the year. 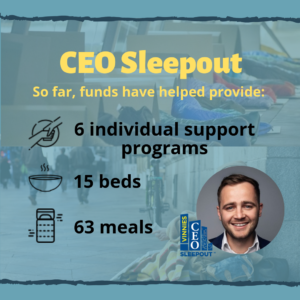 Let’s all come together to raise awareness and end homelessness in Australia!